Warmer air rises in cooler air. This is because hot air is lighter than cool air as it has less mass per unit of volume. Mass can be defined by the measure of how much matter something contains. The actual balloon (referred to as the envelope) has to be so large as it takes such a large amount of heated air to lift it off the ground. To lift 1000 pounds worth of weight you would need almost 65,000 cubic feet of heated air! To help keep the balloon in the air and rising, hot air needs to be propelled upwards into the envelope using the burner.

The Envelope– The actual fabric which contains and holds the hot air.

The Burner– The unit that propels the hot air up inside of the envelope.

The Basket– We agreed with Jo that I’d start posting some of their Facebook posts to GMB, can I have access to their account please?- Where the passengers and pilot are located.

The burner uses propane gas to heat up the air in the envelope to move the balloon into the air. Little hot air escapes from the hole at the very bottom of the envelope as hot air rises. The pilot must keep firing the burner at regular intervals throughout the flight to ensure that the balloon continues to be stable.

The controls for piloting a balloon are actually extremely simple….

1 – To move the balloon upwards – the pilot opens up the propane valve which lets the propane flow to the burner which in turn fires the flame up into the envelope.

If the pilot wants to move in a particular direction they simply ascend and descend to the appropriate level and ride with the wind. This is however limited to the variation in wind direction on the day which may only be 10 degrees and may not be consistent. 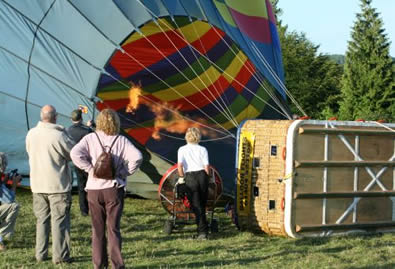