Hot air balloons have been around for centuries and are loved by many across the world. But, whether you simply like watching them glide through the skies from your garden, or you are a regular passenger, you may not know all about the rich history of ballooning worldwide.

1. Unmanned balloon flights have been used in different ways for thousands of years, however, the first untethered flight with people on board was in 1782. That’s 232 years ago! 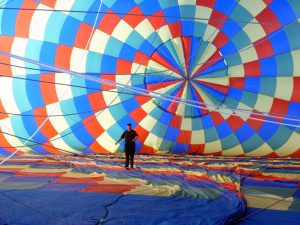 2. Hot air balloons used to be the beginning of battle aviation. The first military use of a hot air balloon was in the battle of Fleurus in Europe (1794), with the French using the balloon l’Entreprenant as an observation post to look out for enemies.

3. These days, hot air balloon flights are one of the safest forms of travel in the world. However, this was not always the case. The first air balloon accident occurred on May 10, 1785, in the town of Tullamore, County Offaly, Ireland. The whole town was seriously damaged when a balloon crashed, causing a fire that burned down around 100 houses.

4. The most famous part of a hot air balloon is the envelope, the part you would recognise as being ‘balloon-shaped’. These are usually made out of nylon and have a melting point of about 230 degrees Celsius!

5. The first passengers of a hot air balloon flight in 1783 were not actually humans. They were actually a sheep, a duck and a rooster! Sheep were considered to be similar to people in constitution so were used as a safety precaution to show the effects of altitude on passengers, whilst ducks and roosters were used as a test control as they could already fly. Luckily, the animals were all safe!

6. Former king, Louis XVI, wanted hot air balloon flights to go ahead but didn’t want to be responsible for potential fatalities, so decided to make criminals condemned to death pilot hot air balloons. He was persuaded this was not a wise idea, and instead, scientist Jean-François Pilâtre De Rozier and aristocrat François Laurent d’Arlandes flew the balloon – successfully.

7. Champagne balloon flights are now enjoyed by lucky passengers across the world, but they were not always such a sign of luxury. Initially, champagne was used to ease tension between the French aristocracy, who flew balloons, and the disgruntled farmers on whose crop land they often ended up!

8. Some people believe that hot air balloons drew the Nazca lines.The first person to claim this was Jim Woodman in the 1970s. His evidence was based around relics of ancient pottery that he believed depicted ballooning, and fabric fragments that could have been used as a balloon’s envelope. Although this idea is often disregarded today, there are some people who still believe the mystical story…

9. The world record for the highest ever hot air balloon flight reached 69,852 ft in a 160ft tall balloon!

10. Many ballooning enthusiasts love a good film depicting a hot air balloon. According to the International Movie Database, in real life it would take more than a whopping 12 million balloons to lift Carl’s house in the movie ‘Up’!

We hope you’ve enjoyed these fun facts about hot air balloons! If you’d like to find out more or perhaps even experience the thrills of being up in the skies yourself, please feel free to contact us today.