A Day In the Life of our Hot Air Ballooning Crew

Ever wondered what it is like to be part of a Hot Air Balloon flight crew? Having worked as part of the administration team in the central office for several months, I decided it was time to diversify and undertake the training necessary to become part of a hot air balloon crew. Following a rather damp June, I finally got the chance to begin training on Friday 1st July.

We met the passengers at around 6am at the Hartnoll Hotel which is set in the picturesque Mid-Devon landscape just north of Tiverton. Having checked-in all the passengers, we embarked on a short drive over towards Waterloo Cross which is located just off the M5 Junction 27 near Uffculme. We made our way into a field which we regularly use for launches near Tiverton and began to unload the balloon.

The Role of the Crew

As a member of the crew, we are responsible for directing the passengers to help us prepare the balloon whilst ensuring their upmost safety. The first job is to off-load the basket from the trailer and stretch out the envelope, which is the balloon itself. The balloons we generally use for commercial flights are 317’s, which means they hold 317,000 cubic feet of hot air and when inflated they stand taller than Exeter Cathedral!

With the sun beginning to warm the morning air, the balloon took off at approximately 8.30am and caught a calm, southerly breeze taking it down towards the small town of Willand. During the flight the crew are responsible for tracking the balloon so that we are as close as possible when it lands. The balloon continued on a southern bearing travelling 12 miles over beautiful rural landscape until we received a call over the radio informing us that they were preparing to land. We could see the balloon settling down just over some trees in a small village called Plymtree, so we entered a farm which was close to the landing site. 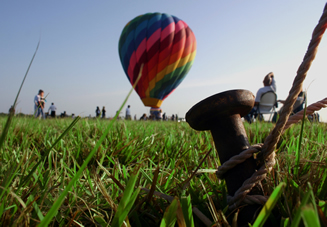 However, when we arrived we realised that the balloon was actually in the next field along and we could not access it from this particular farm. The landing field was in fact owned by ‘Peradon Farm’ and due to the nature of countryside, this resulted in a 15 minute drive around narrow country lanes to reach a field one hedge away from where we were – apparently this is one of the perks of the job!

Having reached our destination, we quickly tracked down the farmer to ask permission to access his land in order to retrieve the balloon. We met the farmer and his wife who were both very pleasant and they followed us down to the landing site to see the balloon which was still inflated at this stage. When we arrived, the pilot began to release the hot air from the balloon and the envelope made its way gently towards the ground.

Once all the air was released, we organised the passengers to help us roll up the envelope and put it back in the bag, much the same as packing away huge tent. We then secured it to the trailer and hitched the basket back on before embarking on a short drive back towards our meeting place near Tiverton. All in all it was a great experience and I have since helped crew on several more flights, each one different every time.