Ballooning is an activity much-loved by many, but did you know that hot air balloons can also be great ways to make the world a better place? Since balloons were invented as the oldest form of human aviation, they have been used to help people in a variety of situations. Today, the purpose of flying hot air balloons is much more peaceful, simply bringing joy into the lives of passengers, pilots and spectators. However, balloons still do good. Here are three instances of when balloons of all kinds have been used to protect lives…

The first hot air balloons were used in China around 200 AD as a kind of lantern for military signalling known as Kongming Lanterns. It is speculated by some experts that they were used to help build the Nazca ground figures and lines, so right from the beginning hot air balloons were an incredibly useful tool in protecting societies and developing the principles of modern civilisation that our world today is built from. Later, they became more advanced, and were able to be controlled by on-board pilots, first in 1793 with a vessel called the “Aerostat Reveillon”. This led them to be used for transporting individuals in battles to protect the nation from invasion and external threats, keeping citizens safe.

Balloons can also be used inventively to combat real issues in the modern world. Recently, activists in South Korea send ‘choco pies’ across the border to North Korea after they were banned there by authorities. Although these balloons were long, large and filled with helium unlike hot air balloons, they were used to transport 770 pounds of treats including 10,000 choco pies to children in North Korea as an attempt to cheer them up in difficult times. This act of kindness is surely commendable, and would not have been possible without the humble balloon. 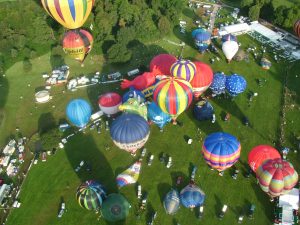 If you’ve been following our blog recently, you will know that Aerosaurus Balloons is heavily involved in the annual Tiverton Balloon and Music Festival. In the modern day, it is through ballooning events like these that we are most often to see how hot air balloons can make a positive impact on the world. Not only do balloon festivals such as the one held in Tiverton this July bring communities together and impart upon people new knowledge and skills about how balloons work, running events such as rigging competitions, but they also raise considerable amounts of money for charities. For example, the Tiverton Balloon and Music Festival raised over £25,000 for local charities from 2011-2013, a figure which is expected to increase significantly with this year’s fundraising.

In the modern day, balloons work their peace-keeping magic primarily by bringing joy to the passengers who go on balloon flights across the world. Hot air balloons are a truly rich part of our heritage, and can be used to such wonderful effects that make them all the more impressive, remaining relevant from their advent as the first flying vessel to their status now as forming one of the UK’s favourite recreational activities.