The latest exciting development in Hot Air Ballooning news might not be what you would expect. Bristol-born YouTube sensation Joe Jenkins is well known for the adventurous places he chooses to show off his piano skills. Last week he decided to take that a step further by playing his acoustic piano during a Hot Air Balloon Ride! Even more exciting, this awe-inspiring flight took place over Bristol, barely a stone’s throw from our own balloon rides in Somerset!

It’s possible his Bristol upbringing was what led to 20-year-old Joe making his next musical stunt a ride in a Hot Air Balloon. The city is after all world famous for the South West balloon flights featured at the International Balloon Fiesta it plays host to every year. No matter what it was about hot air balloon rides that captured his imagination, once his mind was set, there was no swaying him. We’ve long offered a wide range of South West Hot Air Balloon Flights, but this stunt surprised even us! 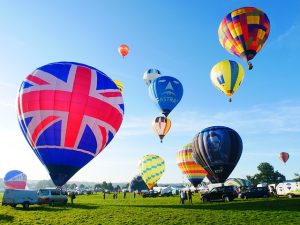 It took Joe a year and a half to prepare for this amazing piano stunt in a hot air balloon flight over Bristol. Managing the space and weight of himself, the pilot, and all importantly his piano caused him and his team no end of headaches. However, in the end it all paid off on the 30th of January 2022, when he completed his long term goal.

Watch for yourself as Joe takes to the skies with his piano. The scenes of him and his pilot, dressed in the perfect costumes, sailing over the countryside in the hot air balloon accompanied by the soft sounds of the piano is certainly something we’ve never seen before. In fact, Joe himself even said “I believe I’m the first person to play acoustic piano in a hot air balloon”.

How Joe Pulled Off This Sky High Stunt

In a behind the scenes video Joe explained all the work that went into making this dream-like scene a reality. A big fan of the Pixar Movie, ‘Up’ (We are too! We even listed it as one of our favourites!), Joe knew that when it came to creating a spectacle around playing it’s main theme tune, only one thing would work. “I have to play this in the style of ‘Up’” he says in the video.

After some ill-thought out attempts to play with small balloons attached to his piano, Joe realised that the only way to really capture the imagination of his audience was to take his piano up on a hot air balloon ride.

The first problem he had to tackle was finding a Hot Air Balloon basket big enough for his piano. He was starting out in a good position, his piano at 116cm was the smallest type manufactured in the last 80 years, but even this wasn’t enough! Despite a visit to Cameron Balloons, the world’s largest manufacturer of Hot Air Balloons, he still couldn’t find a basket that was big enough. The biggest he could find measured 114cm, only 2cm too small!

Not to be put off, Joe spent hours looking for an even smaller piano and even when he found one, it required significant alterations before he managed to make everything fit. What’s even more exciting is that the pilot, Pete, who Joe said was an endless source of optimism during the process, is one of our very own hot air balloon pilots! For those of you interested in learning more about what it’s like to be one of our pilots we’ve interviewed one here.

After his stunning south west balloon flight, Joe was left feeling very wistful. He said, “times like these make me realise how lucky I am to be able to do stuff like this”. 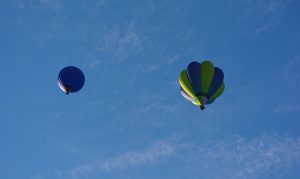 Whether it’s accompanied by a musical instrument or just by yourselves, taking a South West Hot Air Balloon Ride is something that should be at the top of anybody’s bucket list. So contact us today to arrange your own amazing experience, and be sure to visit our news page to read the latest inspiring hot air balloon stunts.