With an abundance of interesting species, and many protected areas, the UK is a great place to see wildlife. But you might not have considered just how many different animals you can spot from the air. The quiet and stable platform of a hot air balloon offers a great chance to see some of Britain’s natural wonders. Here are some ideas of what you might expect to see over spring time in the South West of the UK. Consider bringing binoculars and a camera.

Deer have widespread distribution across the UK, but they’re often quite reclusive. If you sight something from the air in the South West, your most likely candidates are red deer, fallow deer, or roe deer. Red deer are fairly easily recognisable as the largest wild animal in the UK, with a deep browny-red coat. Roe deer can seem to have similar colouring to red deer from a distance (of say, 1,000 feet) but they’re much smaller and less stocky.

Fallow deer have a much lighter coat, and although you might not be able to distinguish their white spots from the air, you may be able to make out the distinctive white markings on their rump. If you’re lucky and have sharp eyesight you might even spot a muntjac deer. These are a much smaller species that can easily be mistaken for a dog from far off. They have good distribution across the South West, but they are highly reclusive, so it really is a special event to catch one out in the open.

If you spot a deer, look for more. You will seldom ever see a deer on its own, normally at least 2, often many more. Listen for their high pitched call, very distinctive. Stags, count the points on the horns of them. The number of horn tips determine the description…….4 pointer, 6 pointer, 10, 12 etc

You’d need sharp eyes indeed to catch sight of hedgehogs waking up for spring time, but it’s more than likely that a balloon flight will offer you a glimpse of rabbits, hares, and even foxes. Hares tend to be fairly conspicuous from the air on the approach of spring, as they build a ‘form’ – essentially a nest – of flattened grass or corn in the middle of open fields. Spotting foxes is a little trickier, but if you’re out at dawn or dusk you may see a brown or red coloured form slinking its way down country lanes or weaving through the tangles of a copse.

Tree rats to country folk, otherwise known as grey squirrels to most people. It is said there are 50 shades of grey squirrel……….. Mr Brock (Badgers), in the mornings making their way home after a nights hunting. In the evening on their way out to find food. 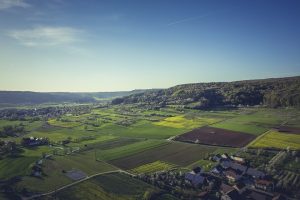 A balloon flight offers a unique perspective on bird spotting. In April and May the swallows return, putting on a show as they zip over the landscape. Peregrine falcons are an impressive and thankfully more common sight in the South West at the moment, and frankly even the humble wood pigeon is transformed when you’re looking down on it in flight. So if you want to see wildlife from a new angle, look into balloon flight opportunities near you.

Other than birds of prey, birds only fly 2 or 300 feet above ground level, so you will be looking down on them going about their daily business

Hippopotamus – You don’t need sharp eyes to spot these, making their way down to the nearest lake or water course first thing in the morning. Contrary to popular belief, hippos do not eat fish, they are herbivores & go to the water to swim & cool down followed by grazing on the lake shore. They have enormous mouths with jaws which hinge through 90 degrees each, thus opening their mouth to the sky fully. Local tribal folklore reveals that the reason for this is to show God that they have not been eating fish.

We could go on, but we won’t. Join us in Africa and other parts of the world where we fly to enjoy that kind of wildlife…